This was my first time -- I had never driven a camouflaged car before, forget reviewing it. Now I have. This wasn’t the first one to be organised though. It is a new marketing trend I am still getting my head around. Is it helpful for us? The enthusiasts? Not sure about that but now we have few more answers about Hyundai’s 7-seater SUV. I had requested the Times Drive family to send in their questions for Hyundai Alcazar. I had promised that we will try and answer all of them after the pre-launch event in Bishangarh, Rajasthan. So, here it is- a list of questions we have answers to. 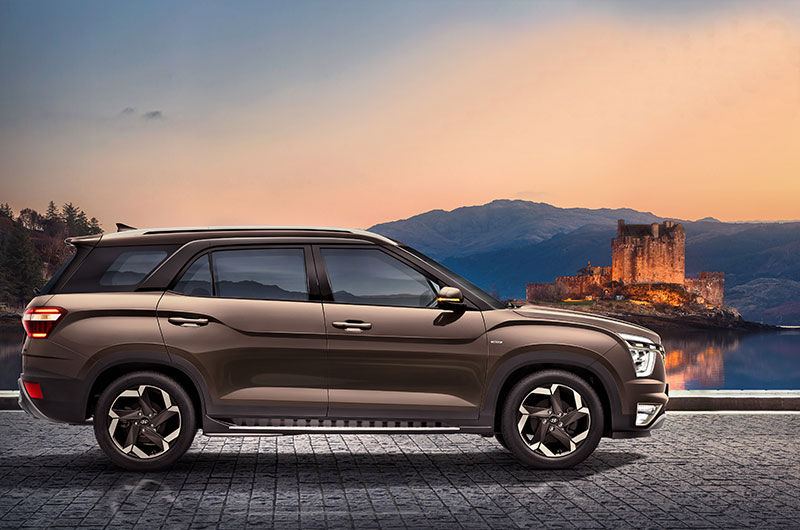 Obviously, longer. The face has that Creta resemblance, with the whole light cluster and grille shape. However, the cascade grille had chrome studs as you could see in the pictures, which were released post our walkabouts. The rear half of the Alcazar, makes it look very distinct. The increment in length and wheelbase gives it a totally new shape. If you look at this car without comparing it to Creta, the shape will not look disproportionate. However, this stretched body underlines the 7-seater proposition, not the SUV. Had the roof been a bit higher or the car was taller, the appeal would have doubled.

The biggest difference between Alcazar and Creta is the shape and personality of Alcazar as mentioned above. I have also mentioned that it was a camouflaged drive so we don’t have all the differences revealed like the list of features but there are few changes we know. Hyundai Alcazar is coming with a new 2.0-litre petrol engine and the wheelbase is 2760 mm now. 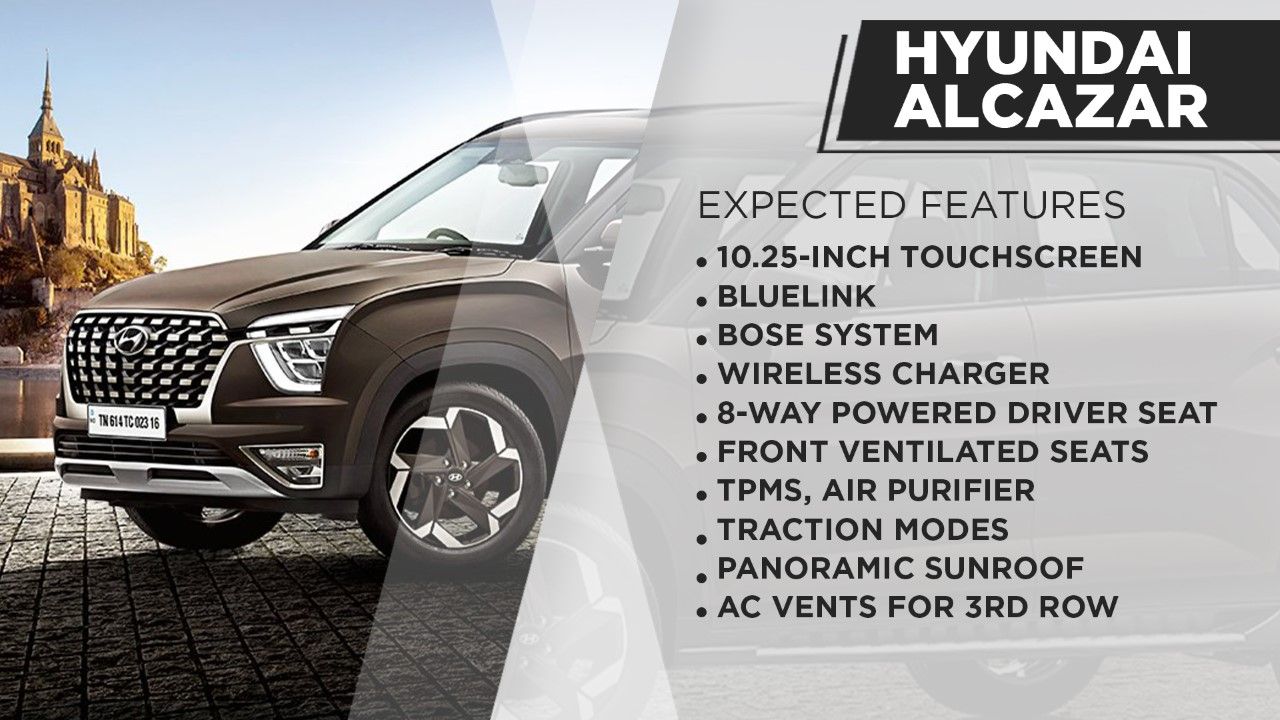 I drove and was driven around in the 6-seater version of Alcazar, version with the captain seats in the second row. Why did I mention this? The captain seats had an easy tumble-down mechanism, which helped me enter and exit the third row easily. Will have to check if the 7-seater version is as comfortable in the entry-exit department. The third-row seat is adequate for two adult passengers. The knee room is just okay for any average Indian height passenger. For me, the gap between the two captain seats came as a relief. The back comfort and headroom also felt okay. There could have been a bit better thigh support though.

We have 7-seater versions in almost all the segments in India. Right from subcompact hatchbacks to expensive SUVs. This makes us very flexible as far as our expectations from a 7-seater car are concerned. The Alcazar, equipped with the AC vent, charging point and cupholders for the third row, is a solid proposition for a 6/7seater proposition.

Given Hyundai's track record, be ready for more than dozen-ish Alcazar variants, but engine and transmission wise these are the options: The petrol engine has a 2.0-litre capacity, producing 157 bhp of peak power and 191 Nm of peak torque. 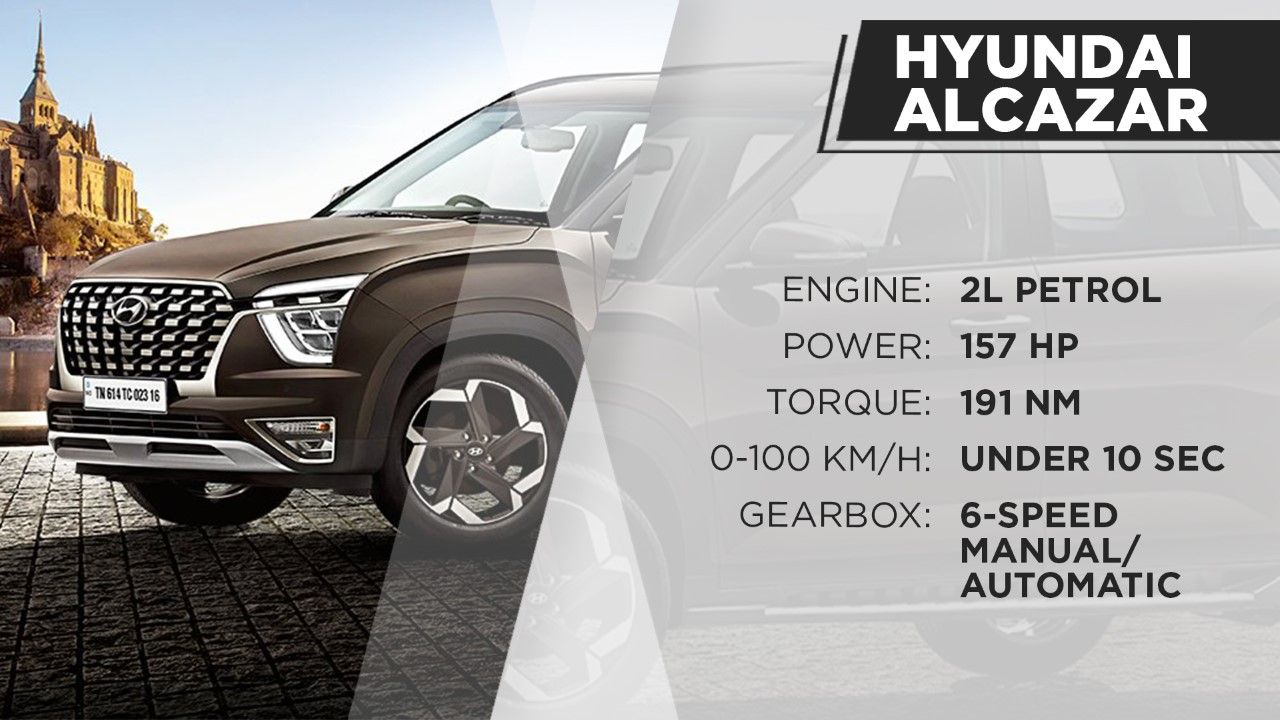 The diesel unit is 1.5-litre with figures of 113 bhp and 250 nm. The transmission options include a six-speed manual and automatic ones. 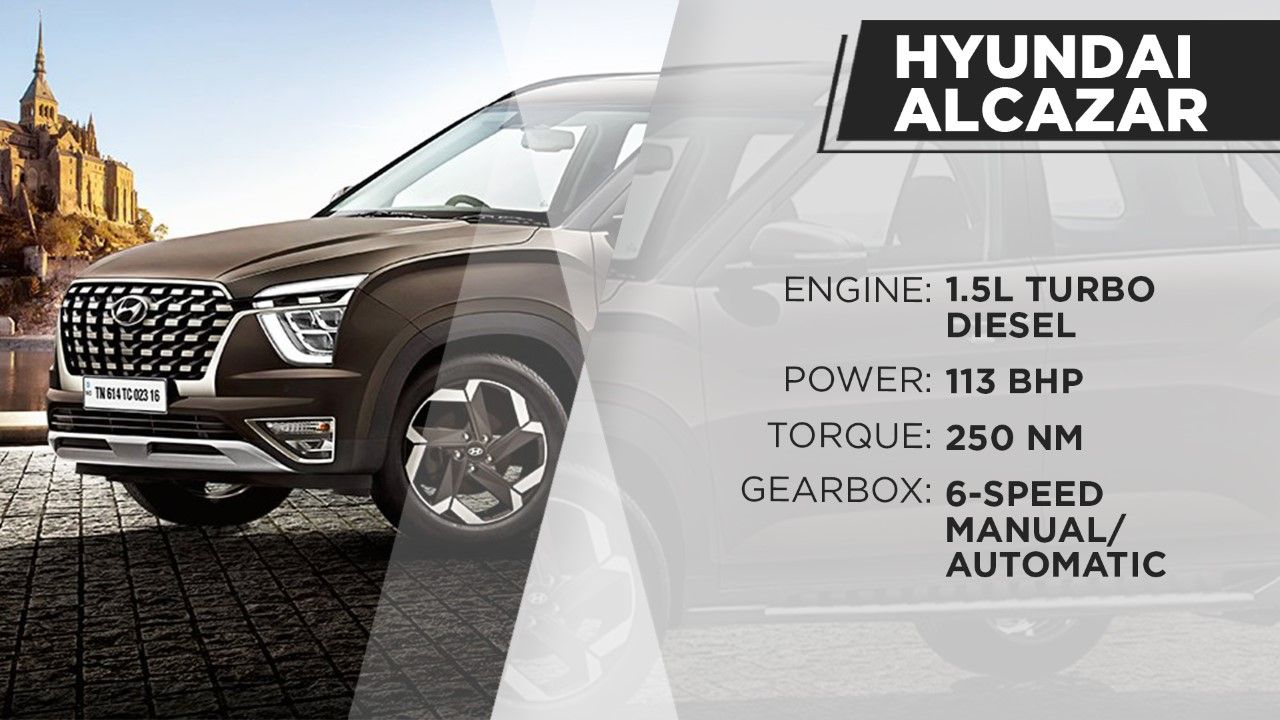 This is the reason I called my encounter with the Hyundai Alcazar, a blind date. The route chosen for us to drive the Alcazar on was short and time was limited. I would request you to please take my words as just a first impression and not the final verdict. I drove the manual Alcazar for around 8-9 kilometres, excluding that one kilometre stretch of dirt track due to my topographical challenges. The initial thrust was not the most exciting, it was linear. The power, however, was pretty much constant in the higher gears too. So, it should be good with a full house to I assume. The size and weight of the car are felt around the corners and turns, with a bit of body roll too. The cabin was totally quiet and the best part about the new Alcazar’s drive was the ride quality. The suspension setup is well balanced and comfortable. This is true for the third row of Alcazar as well. I experienced it properly when Murli my colleague was driving, and I was in the third row.

Talking to Tarun Garg, Director, Sales and Marketing, Hyundai India, we were told that the Hyundai Alcazar will be launched in April only. We can expect that launch around the third week.

The segment Hyundai is trying to capture, and the aggressive strategy of Hyundai in India could mean that we might see this with a competitive entry price tag. Could it be ₹11 or ₹11.5 lakh? Would be impressive if the company manages that. However, after looking at the changes and features, Hyundai is planning, ₹12-12.5 lakh price tag seems to be a more realistic guess.